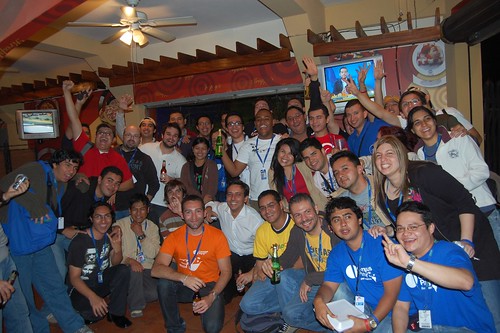 Les presento esta entrevista con The Happy Dog, una banda de folk de los EE.UU. que ha ganado la fama por medio de la promoción de su música en formato lossless por medio del sistema de BitTorrent.
Interview with Jesse Wagner from The Happy Dog
As far as The Happy Dog are concerned, there are no limits to spreading the word out about their music. And if giving their albums away for free is what it takes for you to listen to this great band from Pennsylvania, USA, so be it! I recently managed to chat with Jesse Wagner, the writer, singer and guitarist for The Happy Dog, about their current projects, and their filesharing experience.
What's the musical concept behind The Happy Dog?
I don't think that will ever be settled on. Things are constantly changing so much in life and influences that it is hard to decide on one single identity. The internet has a tendency to either expand your perspective, or kick your ego in the ass. There are all these swarms of great writers, painters, orators, etc. that are flowing springs just waiting to be tapped. They set up these paths of influence for those who enjoy or identify with what they have done. Some people find and create a new path at the end of the path they have been given. These new paths are created by accident or by drive. Just when the last human boundary (whether it be artistic, political, economical, theological, physical etc.) has been marked, someone is going to try and pass it, and people will keep doing that until we are all gone. Today things are moving so rapidly, new ideas get to your head in minutes not days. How long did it take a new song to get to a listener in the early 1900's? The song had to be lucky enough to be found, then it had to be recorded; then pressed. Then the lucky ones were distributed, and maybe it fell into the right hands after having travelled for months. Today, you can write it and distribute it in the time it takes you to record and press send the Enter key. someone in Tokyo can be turned on to something that was born in Ontario in less than a minute. We are just beginning to see this effect reshape music. immediate global influence. so i guess what i am trying to say is that we like the idea of Standing on the shoulders of these new giants even if some of these giants are ants. We like the idea of folding tradition or boiling the present. We hope that people will stay by our side and love what comes next from us because it will not repeat itself. Why would you want to settle on a single sound when you can be a chorus?

Who are The Happy Dog?
There are different musicians and friends that help comprise the band. Currently the band has been working in quartet format, with Joe Falcey on Drums, Jon Stenger on Keys, Keith Snyder on Bass, and me on the guitar, Rocky Golby as our productor, and Daniel McGonigal from Saint of Tritonix Studios.

Tell me a bit about the history of the band. How did you get together and started playing?
We were lucky enough to have a kind Santa-like man named Bob Long in our area. He took from his own money and financed a place for underage kids to develop their music at a venue called Frolics. Without that place, none of our music would have happened.

Where do you play regularly? (I mean geographical places, if you travel to gigs, if you play on local spots, etc.).
We have been playing at festivals in the northeast of the U.S.

Are you related to any local scene, or a specific genre?
there are a few bands out there that are dear friends. Hezekiah Jones is my friend Ralph's
brilliant creation. Si Senorita are like family in a lot of ways. As for our style of playing, we are frequently compared to Wilco, Ween, The Flaming Lips, Pink Floyd and The Beatles for various reasons. I think our live shows take on a more improvisational spirit that could be compared to The Grateful Dead.

What is the main message behind your music?
I have been kicking this around a lot lately. The problem is that most people are only going to hear what they want to hear. That kind of puts a lead weight on the idea of having a message, but to be honest, no matter what you say, it's going to be processed through everyones lenses and filters. at first, this was a disheartening revelation. Then it became clear that it is actually a beautiful gift. You can imply things through your lyrics that paint abstract larger symbols much like a dream paints an emotion. You can let the thread of message be as blurry as you want and it will always come out as clear as it ever would have. I'd really like to have the ability of Dylan to write so eloquently as those grand tales of history and fate. I admire Jeff Tweedy, from Wilco, for writing simple songs, or a drunken ramble; yet still retaining a voice that is comprehendable.

What are your current projects?
We are in the studio working on creating the best album we can. I am looking forward to collaborate with Hezekiah Jones and Tin Bird Choir. We are also toying around with releasing some unfinished business in a few months.

One of the most interesting aspects of your band is the fact that you've been uploading your music on private music sites. How and when did you come up with that idea?
We released an old demo on this torrent site and it took off (we now have over five thousand snatches), from there it was a no-brainer. I think it is impossible that we were the first to do this, so I can't take credit. I think we've just realized how lucky we got.

What has been the response of the people on these sites about your music?
Extremely exciting. it is an honor to have so much support after years of toiling in the dark. I truly feel a great bit of debt to anyone who has rewarded us with their attention. I cannot stress how wonderful that makes us feel. Even if it is just a fleeting wave, it has made it all worth it. The amount of praise we have recieved is unjust, you people are nuts!

Is this different to the response from people IRL?
What it has done is create an idea that is actually bigger than the sum of its parts. In real life, people won't look unless someone else is pointing. We have been lucky enough to have more than our share of respect in flesh, but this internet thing is a whole different beast. The audience is so much more varied in its taste, there is so much more chance that you will find a friendly tongue in the strangest of places.

Why did you decide to freely distribute your music, instead of just focusing on selling your albums like most bands do nowadays?
It just makes more sense. I would love to go to a show where you could walk in and enjoy the music, and then pay what you want on the way out. Why should there be a toll keeper at the gate to your creativity? Personally, I'd rather have the ears. Don't get me wrong, The money would be great, but it's the listeners what really matter in the end. If each life is a stone to cast, why charge to have ten people watching the wave when you can have ten thousand people there to hear the ripple? economically speaking, you are still being payed in ghost dollars...

What are your thoughts so far on your decision? What are the positive aspects of it?
So far, I am loving it. Maybe it will lead to a day when we can dedicate all our time to that which we love. Not just the cycle, not just the music. But life.

What are the negative aspects of it?
I can't really think of anything that is particularly negative. I guess it would be nice to have the financial backing to pull off bigger and better things, but I am very happy to have the opportunity to even be involved in an interview that would ask such a question. Understand?

I do, I do! So do you think that sharing your music on the web is a good strategy for your band to get known or famous?
Who knows? Anything is possible! It has already done a great deal for us. We were even offered a couple of contracts and such. A tour is developing in Europe in the not so distant future. I guess we've proven it's possible.

Is filesharing, for you as a band, a way of saying you don't expect any profit from what you do, or do you think you can still make money while sharing?
Both. Like i said and i truly mean it, I'd rather have the ears. This life is nothing when spent alone, and I hope that we are being responsible with the voice we have been given. And if the people see it fit to help support us, all the better. It's going to come back to them anyway. I kind of like the idea of the people being empowered... actually, I love it.

What albums are you digging right now? I'd like you to recommend a couple of albums from your current playlist.
Bob Dylan Bootleg Series
Beach House - Devotion
Bonnie 'Prince' Billy - Master and Everyone
The Beatles - Rubber Soul

What are your future projects as a band? What can we expect from you in a couple of years?
A folk country album, an electronic album, a kids album, an album for a hospice.

What do you expect to achieve on the long run? What is the dream you've set for The Happy Dog?
We would love to eventually have a sustainable venue: solar power, local brew, local food. And at least one album that outlives our bodies.

who would you rather see win a fight: a happy dog or a jolly sheep?
Neither. I wish they would just relax.

Y ya no vuelvo a joder a nadie para que la escuche. xd